Dr. Phibes puts your proprietor to the Test... 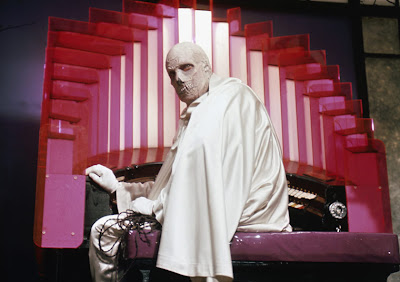 ...and administering a Halloween horror test through the indispensable continuing ed program run over at Sergio Leone and the Infield Fly Rule. And the questions suggest that he's as queer for Dark Shadows as your proprietor, which is no less than Halloween deserves. ONWARD!

Gonna go with The Haunted Palace, mainly for the post-production gymnastics the film went through to shoehorn it into Corman's ongoing Poe cycle, and for the joy I had seeing it in San Pedro last month. It is a lovely piece of Lovecraftian cinema, though, and Price is just fine in it.

2) What horror classic (or non-classic) that has not yet been remade would you like to see upgraded for modern audiences?

Though many might argue that it's science fiction, The Incredible Shrinking Man is a dandy horror film. Though I'm extremely wary of the notion of Keenan Ivory Wayans and Eddie Murphy remaking it (as has been threatened for years), I'm not averse to a contemporary take on it. In my mind's cinema it retains the original dialogue (including Grant Williams' achingly gorgeous final monologue), and boasts a new Radiohead score.

Another remake I would like to have seen is the proposed Tim Burton/Lisa Marie remake of Bava's Black Sunday. Marie really should have been the star of one of her lover's films - one of those rare instances where I think intimates should collaborate, considering the amazing work she did in others of his films - but it wasn't meant to be.

The 1795 storyline put me in awe of David's incredible sensitivity. But Barnabas Collins is the fucking Man, so I gotta go with Frid. 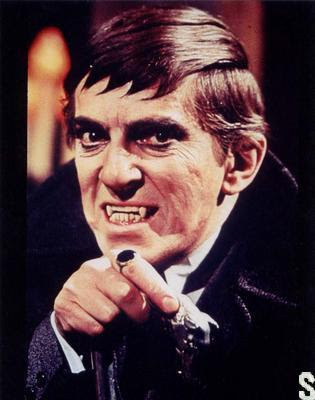 4) Name the one horror movie you need to see that has so far eluded you.

I won't count movies I've seen on video but not theatrically (would love to catch up with An American Werewolf in London on film, someday) or films that are famously lost (like London After Midnight). I suppose it's a bit strange that I haven't seen the original Friday the 13th, but I feel greater pangs over having seen so few of the giallo flicks on the incredible list posted on Sound On Sight today.

5) Favorite film director most closely associated with the horror genre.

I gotta go with Dario Argento. The stylization of his best films sends me, and even his worst films are quite watchable. This blog was originally to be called the House of Peacocks, located in Brussels, Belgium, as an homage to the man but I decided to change up the name to give it its own flavor.

No damn contest: Barbara Steele. Black Sunday clinches it alone. Plus her eyes are incredible: 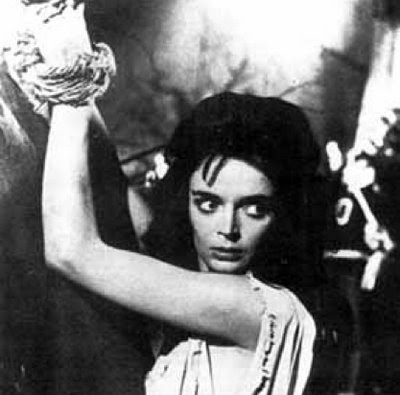 Next week I intend to buy a lush sushi dinner for my host and watch some of the films featuring this creature, on its birthday. Through all of his iterations, my fondness for Godzilla remains unabated.

Whether or not Child's Play is an established horror classic is open to debate, but Bride of Chucky absolutely transcends it. Ronny Yu packs the thing with a cornucopia of fine choices, from the blue lighting to Jennifer Tilly's fetishwear to the deployment of a bubble machine during the transformation sequence.

Of all the Hong Kong expatriates who worked in Hollywood following the 1997 changeover, Yu's output may be the most curious. I very nearly picked his Freddy vs. Jason to answer this question - like Bride, it eschews any attempt at scariness to instead focus on artfully crafting a bloody fantasy.

9) Name a sequel in a horror series which clearly signaled that the once-vital franchise had run out of gas.

My threshold for watchability is very low, i.e. it takes a lot to make me want to write off a franchise. That said, per my previous entry, Halloween: Resurrection is absolutely tedious, and (among many other problems) wastes the talents of a former classmate.

11) What was the last horror movie you saw in a theater? On DVD or Blu-ray?

As of this writing (executed piecemeal, over several days), Nadja was the last horror movie I saw theatrically. And though it doesn't count as a horror film per se, the "Just A Dream" two-parter from the Justice League cartoon offered some surprisingly-strong-for-Y7-rated imagery, and a beautifully nuanced voice performance by William Atherton as John Dee/Doctor Destiny. 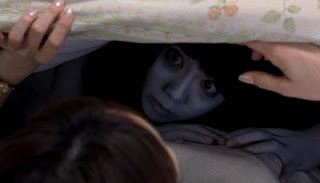 Rather than repeat myself, I'll say Kayako/Toshio from the Ju-On/The Grudge series. Each of the films has at least somewhat unsettled me, and I think taken together they're one of the most notable bodies of work in the genre of the last thirty years.

Clearly recognizing that The Card Player is the least of Argento's features didn't keep me from wishing it were the pilot to an ongoing TV series. I also note that I had kind of a fucked up experience with his most recent film, Giallo, put off as I was by the false spoiler in the film's IMDB page. And that tacked-on ending undermines what could have been Argento's most powerful finish.

Joan Bennett brings class to Collinwood, but there's a scene toward the end of the first Barnabas arc where Julia is beset by low-tech, ghostly visions. It's basically Grayson Hall just riding a fucking crazy train - for ten glorious, unbroken minutes, the only thing you saw on ABC was Grayson Hall losing her shit. I would LOVE to have been in the studio the day that scene was shot.

God, I don't even remember. I'm not sure it was a single epiphany as much as it was a gradual process. I steadily weathered all of the images that schoolmate Yuri Lowenthal savvily collected as the root of our generation's cinematic trauma (specifically: the daughters in The Shining; the clown in Poltergeist; the sister in Twilight Zone: The Movie [see below]; and Ralphie Glick at the window in Salem's Lot) and just gradually developed a taste for it.

It doesn't boast the giant insects/creatures run amok that most people associate with the Gordon oeuvre, but I thought Tormented was a nicely effective little spook show. Plus it had a fun role for Joe Turkel.

19) Name an obscure horror favorite that you wish more people knew about.

I want to share Bigas Luna's film Anguish with everyone, but need them to not read reviews and to just fucking trust me.

I'm going to go with "fuck, no." Not because of its disgusting premise, but because it offers no wit or insight along with its gruesomeness. I've said before that if Tom Six was so influenced by David Cronenberg, then how come his films aren't smarter?

21) And while we’re in the neighborhood, is there a horror film you can think of that you felt “went too far”?

I've no desire to see A Serbian Film. Or to link to it.

22) Name a film that is technically outside the horror genre that you might still feel comfortable describing as a horror film.

Billy Wilder's Sunset Blvd., in addition to being my favorite of his films, gives me the fucking creeps. Norma Desmond is a glorious mess whose plight transcends camp, and her need to take down others with her is nothing short of vampiric. Terrifying.

Like'em both, but Scott gets a slight edge. Not sure why.

24) If you’re a horror fan, at some point in your past your dad, grandmother, teacher or some other disgusted figure of authority probably wagged her/his finger at you and said, “Why do you insist on reading/watching all this morbid monster/horror junk?” How did you reply? And if that reply fell short somehow, how would you have liked to have replied?

Mom would give me this too-pointed glare when she didn't approve of something we'd seen together. I just ignored her. I love her dearly, but when she put that glare on, I ignored her.

25) Name the critic or Web site you most enjoy reading on the subject of the horror genre.

The House of Sparrows would not have opened without the abiding influence of Arbogast on Film and Final Girl.

26) Most frightening image you’ve ever taken away from a horror movie. 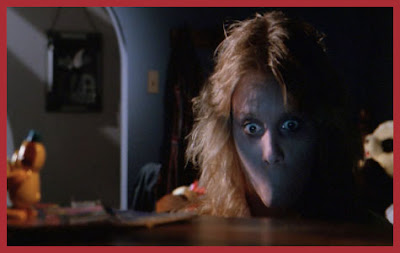 27) Your favorite memory associated with watching a horror movie.

The applause that busted out in the Castro Theatre the third time she said "Bastard."

The Blair Witch Project. It established a template and a spirit for 21st century, low-budget, off-Hollywood horror. And, after the hype and backlash, it was scary as hell.

Beasts (from the first film). Phibes kills a guy by shooting a brass unicorn at him from across the street, for crying out loud.

30) You are programming an all-night Halloween horror-thon for your favorite old movie palace. What five movies make up your schedule?

This is the question I'm most eager to read the responses to.

An American Werewolf in London - Because I've never seen it projected.

Anguish - Because I want to feel an audience's reaction to the halfway point again.

The House With Laughing Windows - Wanna fatten the program up with a movie I've never seen.

The Sleeping Car - Never saw this either, though its mention in a trailer for a month of horror on Cinemax back in the early 90s intrigued me. So my horror-thon is framed by David Naughton pictures. Clearly he's pleased.

Naturally, this exhibition would be loaded with at least two horror trailers before each film, and short films scattered as entr'actes. Including Peter Tscherkassky's Outer Space.

So that's a wrap on this, right on time for Halloween! How'd I do, Doctor? ...Doctor? 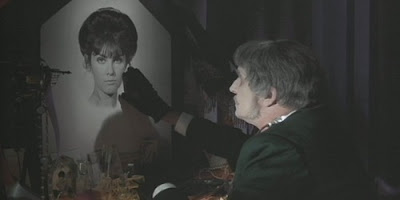 Oh, never mind.
Posted by David Robson, Proprietor, House of Sparrows at 6:24 AM