THE GATES OF HELL

When a priest commits suicide in a cemetery in Dunwich, the resulting bad vibes are picked up during a seance in New York City. It becomes clear that the good father's death has opened a portal to hell, and a disparate group of folks have only three days to get to Dunwich and close the portal before a flood of demons come through it and destroy the world.

Your proprietor saw this at the house of good friend and frequent commentator Mark Nigara. Coincidentally, this film (and a few of the other notables in the oeuvre of director Lucio Fulci, including HOUSE BY THE CEMETERY and THE BEYOND) were released contemporaneously with the studio albums cut by Ronnie James Dio with Black Sabbath. Mark had been paying hommage to the late RJD all week, and some of the Dio-era Sabbath proved a perfect prelude to the Fulci double feature ahead of us (the second film seen, HOUSE BY THE CEMETERY, was reviewed here previously).

THE GATES OF HELL, as the title suggests, boasts enough gruesome imagery and atmosphere to fuel several heavy metal albums. Fulci sacrifices realism, production value, all but the most bare vestiges of a plot, and any sense of logic to craft a dreamlike, genuinely suspenseful descent into hellacious fantasy. Some scenes - the suicide that kicks it all off; a harrowing rescue from a premature burial; the attack on a tavern by some angry spirits - are textbook examples of suspense filmmaking.

But other scenes, man, I don't know: a makeout session ends with bloody tears and vomited entrails; Bob, the town pervert, is dispatched for scant reason with a table drill through the head; the truly baffling coda that may signal the resurgence of the damned. By all accounts Fulci embraced all manner of experimentation on his films - indeed, the aforementioned coda has been said to be the result of a free-wheeling mashup by Fulci of random footage culled in the editing room. There is an artfulness to Fulci's insanity, and every so often a gruesome scene comes from so far out of nowhere that it does feel like some 3 AM dispatch from the cinematic subconscious. Bob's toolshed lobotomy is completely unconnected to the supernatural forces gathering in Dunwich, but the sheer excess of it (I'm astonished the drill didn't bore into his eye, frankly) suggests a deeper connection to the film around it.

As unforgettable as many of the setpieces in THE GATES OF HELL are, the full-tilt approach Fulci takes to the material keeps the film from remaining unsettlingly in the mind. If figures prominently in the run-up to THE BEYOND, Fulci's masterpiece, which perfects the fantastic scope of the previous film while amping up the apocalyptic fantasy. But that's a review for another time.

THE GATES OF HELL is reviewed here under the aegis of the Final Girl Film Club, run as always by the sharp and sparkly Stacie Ponder. 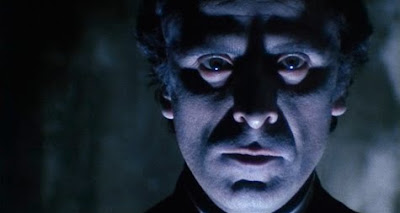 Posted by David Robson, Proprietor, House of Sparrows at 11:12 PM