THE HOUSE OF THE DEVIL

1983ish. College student Samantha is looking to get her own place. The ideal apartment is within her reach but out of her price range. Salvation seems to come in the form of an odd but lucrative babysitting gig at a house outside Samantha's college town. After getting a ride from her best friend, and negotiating terms with the quietly bizarre couple who live in the house, Samantha is left alone with her unseen charge.

High above, a lunar eclipse. 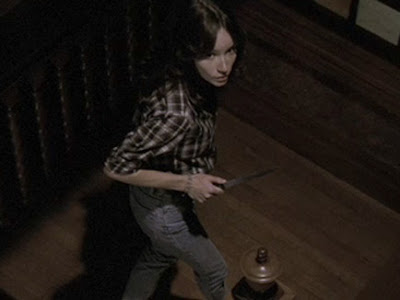 Shooting on film and recreating a more-than-convincing 1980s milieu (right down to a pizza parlor whose wares your proprietor could practically TASTE), writer/director/editor Ti West has crafted a meticulously old-school, low-budget horror flick. And yet for all of the intelligent filmmaking and storytelling on display, it doesn't serve any ultimate point. THE HOUSE OF THE DEVIL is happily free of ironic campiness, and also steers clear of genre commentary now familiar in modern grindhouse exercises. In the end, I felt like I'd sat through a genuine, mid-80s horror programmer, of its period but undistinguished. West sticks to his guns right down to the ending, which may have been powerful in 1983 but today is cliched, too-familiar, and predictable. West has succeeded in his goal, no question, but there's nothing personal in THE HOUSE OF THE DEVIL. There's energy and personality, but no soul. Without that investment, I have to wonder why West bothered in the first place.

But there's a scene I keep coming back to. It's none of the baby steps taken toward the film's denouement, none of the layers that get peeled away to reveal more of the mystery. It's a scene about halfway through, in which Samantha, installed in the house, bored and (she believes) unwatched, throws on her Walkman (yes, an actual Walkman), and dances through various rooms and hallways to The Fixx's "One Thing Leads To Another." Jocelin Donahue's built a thoroughly relatable, and likable, heroine up to this point, but somehow it's this scene that tips Samantha over into our sympathies. It's a breezily lyrical moment that, unlike similar scenes in other movies, feels necessary, and it lingers long after the film's well-realized but programmatic thrills quickly fade. And the Fixx track sounded just dandy on a theatre sound system.

Reservations notwithstanding, I'm eager to see West's next picture, THE INNKEEPERS, the tale of the last employees remaining at a haunted hotel.

This review tweaked for the Final Girl Film Club, run as always by the awesome and amazing Stacie Ponder.
Posted by David Robson, Proprietor, House of Sparrows at 9:51 PM